So, just starting on a new course, on the basics of modern AI. Our first project is going to be an AI controlled robot, which is suppose to solve a Sokoban puzzle. 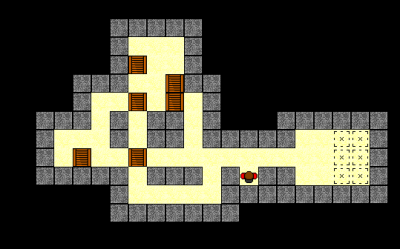 We are going to use classic AI techniques, GOFAI (Good Old Fashion Artificial Intelligence), which means that we are going to create a real world model, and then program the robot in offline-mode.

Once again the robot is going to be constructed from LEGO, and use a Mindstorms NXT as controller. Hopefully the construction phase is going to be a bit simpler than with Steve, the crocodile. And again, we are probably going to use the Not Exactly C (NXC) language for creating the software.

The controlling software, which we would like to concentrate our effort about in this project, is really going to be a multi-layered, multi-task software, instead of a huge block of functions performed in sequence, as it was the case with the crocodile. The software and structure is really going to be inspired by Rodney A. Brooks robot, Genghis, from 1989

There is more about Genghis at http://groups.csail.mit.edu/lbr/genghis/ including Brooks paper on the robot and the AI used.

More to come, as we get the robot constructed next week.